This is an important argument, and ties in with many themes address in previous Sunday Trains, including Sustainable Real Estate Development is Good for the Economy and Other Growing Things (30 June 2013), Trains & Buses Should Be Friends (24 Nov 2013) and 'the successful communities are going to be the ones who get rail.' (1 Dec 2013), so join me below the fold for the most recent consideration of these issues and Transit-Oriented Development, commonly abbreviated as "TOD". 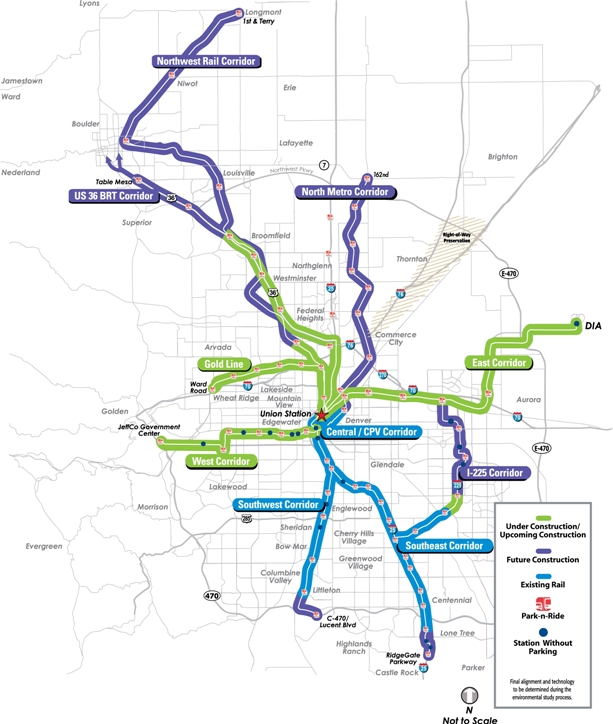 It is easy to read this as "connecting to downtown", but that is just one version of what makes a major employment center. Whether downtown area or not, what is key is the clustering of employment. To quote further from the study:

Employment dispersal away from traditional central business districts can work well with transit operations, even in suburban locations, but only if employment remains clustered in relatively dense concentrations with appropriate transit service, parking controls, and placemaking provisions. It might be necessary to change the way we think about employment, from urban versus suburban, to more of a model of dispersed versus concentrated nodes. Places with high employment densities can be served with transit networks and made into places that can provide people with amenities during the lunch hour that foster more non-auto trips.

So the distinction here is not "downtown" vs "suburban" but "concentrated employment centers" versus "dispersed employment".

It is an open question as to what the next step should be after those corridors are provided for. I have argued that the same kind of government intervention that has generated sprawl development of both residential and employment centers can be reversed in strategic locations to re-orient suburbs into a more ecologically sustainable clustered development system ... and this argument suggests that doing so will also open up greater opportunities for TOD throughout urbanized areas and into their hinterlands in a metropolitan area. 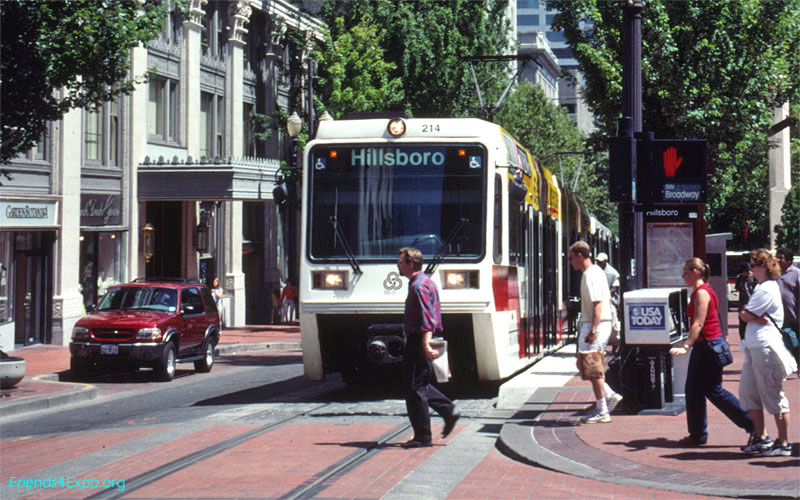 As John stresses, quite often the political boundaries of the individual municipalities do not correspond with the area within which we take our regular trips. In an urbanized area, we can easily live under one local government, work under a second, go grocery shopping under a third and go to the movies or restaurants under a fourth, and maybe fifth or sixth. This is the status quo system, entrenched into place by decades of single-user zoning and development models, supported by a range of explicit and hidden rules discouraging diverse multi-use local centers.

This means that an effective system often requires the cooperation of a number of individual municipalities and other local governments in an urbanized area (or areas) and surrounding metropolitan hinterland. He advances both Denver and Salt Lake City as examples of metropolitan areas where partnerships including double digit numbers of individual city and county governments were able to successfully develop and gain local funding for aggressive expansion of regional transit.

The Sunday Train has often stressed that there are no silver-bullets ... there are no one-size-fits-all solution that will, in fact, actually fit all and fit them well. Instead, I have argued that it is necessary to consider the needs that need to be met, and put in place the collection of alternatives that provide a good set of alternatives for meeting those needs.

This argument is reinforced by the research which John refers to a study from the BRT-Champion Institute for Transportation and Development Policy, More Development for your Transit Dollar, which considered three factors contributing to the success of Transit-Oriented Development: government intervention, land potential, and transit quality, and found that as the order of importance for as far as transit-oriented development goes.

And this segues directly into the fourth point ...

So-called "public-private partnerships" have dominated the nexus between transport projects and property development since before the United States gained its independence. They have been important in the United States for intercity transport from the days of the Erie and Ohio & Erie canals, through Federal support for the railroadification of the West, through the Interstate Highway System. They have been important for local transport from the days of horse-drawn local trolleys through electric trolleys and interurbans to the gutting of our trolleys to boost the profitability of internal combustion vehicle manufacturers.

So it is no surprise that the effectiveness of public-private partnerships is a key factor in successful TOD. A critical point here is the development of actual partnerships. Our economic history will provide extensive examples of "public-private partnerships" which involve deploying the public treasury for primarily private benefit ... and at times private benefit and public detriment. A strong public partner is required to ensure that the partnership involves mutual net benefit, and a self-confident public partner is required to ensure that they have the flexibility to explore which of the alternatives providing satisfactory public benefit are of most appeal to the private partner.

John cites a report from Reconnecting America, produced on behalf of the Local Initiatives Support Corporation, "Encouraging Transit Oriented Development: Case Studies that Work" (pdf), that singles out DC as a national leader on joint development, with dozens of joint development projects.

However, rather than a head-count, I was more interested in the detail of a successful public-private partnership in Portland:

One of the best examples of a highly successful public-private partnership that used transit to leverage large-scale redevelopment is Portland’s Pearl District, a new neighborhood built along a streetcar line. The streetcar was built to connect two large parcels of vacant industrial land north and south of downtown. The city struck a deal with the owner of 40 acres: The city would build the streetcar past his property and make other improvements if he would up-zone his property from 15 dwelling units per acre to 125. This was in the early ‘90s, when there was no market for this kind of development, but today it is the city’s densest and most popular neighborhood, and at build-out it will be home to 10,000 residents and 21,000 jobs. The streetcar was subsequently extended to the second vacant parcel, the South Waterfront, where an even more ambitious redevelopment effort is underway.

This private investment – an estimated $3.5 billion in 2008 – helped the city meet several public goals and objectives, including accommodating a significant number of new housing units within the city’s urban growth boundary. The result:

Properties closest to the streetcar were developed at 90 percent of permitted density, compared to 43 percent of allowable density at 3 blocks and further away.

This is a collaborative approach which yielded multiple public benefits from the private investment, as opposed to the one-way public subsidy for private profit that so often comes to mind when we hear of "public private partnerships". As the opportunities for property development profits from sprawl development continue to decline through the balance of this decade, this improves the leverage that a local government ~ or well organized group of local governments ~ can have when a transit investment will yield much stronger public benefits when combined with a substantial increase in infill property development.

Not Losing Sight of the Forest by Focusing on the Trees

We should always keep in mind the fundamental driver for providing local transport alternatives: our current system of fossil-fueled local transport is unsustainable, and if we rely upon it exclusively, we are faced with a race between transport system collapse and collapse of the broader industrial economy which it is serving. We do not, after all, know the timing with any precision, but once we have identified that a fundamental and largely irreplaceable support service is being provide in an unsustainable way, we do know that sooner or later it will stop being sustained.

Having alternatives already in place means first and foremost that our industrial economy does not have to collapse when we are no longer able to provide essential transport services with the current dominant system. It allows for a "soft collapse", with reliance on the present dominant system declining progressively over time, rather than being forced into increasingly desperate efforts to shore the system up until the point of collapse.

So we need to be pursuing provision of more sustainable transport alternatives entirely independent of whether they generate TOD opportunities for property developers.

And it is important that the strongest TOD opportunities are offered on corridor connecting strong, concentrated employment centers. If we shift from the current policy regime, under which establishing new transit alternatives is often a long and difficult struggle, into a Pedal to the Metal policy regime, those are precisely the kind of transit corridors that can serve as higher capacity trunk backbones that give anchor points for a complementary system of sustainable distributed transport alternatives.

And in a "Pedal to the Metal" context, having clear focal points is a strong benefit, since it reduces the risk of shifting the argument from whether to proceed into which alignment to use. Having existing LRT, BRT, and/or commuter rail stations in place will further narrow down the argument, from "should we built it", through "where should it go", all the way to "how should it get there".

As always, any topic in sustainable transport is on-topic in the Sunday Train. So feel free to take about CO2 emissions reduction, energy independence, suburban retrofit and reversing the cancer of sprawl over our diverse ecosystems, or the latest iPhone or Android app to map you bike ride. Whatever.

And on this particular topic, what kind of local transit would you most like to see where you live, and how important does it seem Transit-Oriented Development might be as an element in getting that project up and started?

The Sunday Train doesn't really leave the station until you jump in and join the conversation so ... All Aboard!