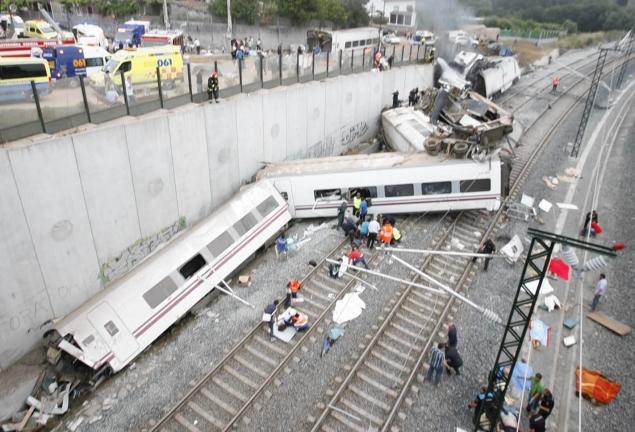 At the time that I start writing, the death toll from the train wreck that took place in Santiago de Compostela in Spain has risen to 79. According to an account shortly after the crash (sp):

Alternating AVE segments with segments of conventional track or of lower specifications occurs at other points of the line. The Alvia train between Madrid and Ferrol, the fastest going through Santigo, travels on different tracks. Between Madrid and Olmedo (Valladolid) it takes advantage of the AVE track. Then, between Olmedo and Ourense it returns to a conventional track, waiting for the completion of the AVE works already underway. Finally, between Ourense and Ferrol it again joins the AVE line, which at the entrance to Santiago goes alongside the old track.

At that moment, the train must brake and when it reaches the tight bend where the accident took place it must leave it speed at barely 80km/h. The velocity drop at that point is very steep: form 200 km/h to 80 in a short time span.

The causes of the excessive speed are still not known. The line where the accident occurred is still not within the ERTMS (European Rail Traffic Management System), a rail traffic mnagement system preventing a train from exceeding the established speed limit or disobey stop signals, very similar to the automatic alert systems already installed in many European countries. This system is the one deployed, for instance, on the Madrid-Barcelona AVE line in october 2011. (translation by Migeru at the European Tribune)

The statement "the cause of the excessive speed are still not know" is referring to the proximate cause, since the ultimate cause is stated directly after: the line is not within the version of Positive Train Control signal system used in Europe, the ERTMS.

30 July: Also see this UPDATE at Voices on the Square: The Santiago Train Derailment Could Have Been Prevented with a Euro 6,000 beacon


Merely Reducing the Carnage of the Motorways is Not Good Enough 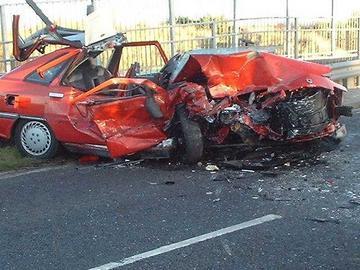 While train wrecks and airplane crashes grab the headlines, the Grim Reaper's real helpmate in passenger transport is the motorway. In 2008, 3,100 were killed on the motorways of Spain, a mortality rate of 67.2 per million. This is substantially better than the grisly toll taken by US motorways, with a Wikipedia contributor listing 32,267 US road fatalities in 2011, a mortality rate of 104 per million.

I mean, imagine if some single event killed even 1/10th as many Americans ... if there was some single event that killed around 3,000 Americans, the reaction would be national shock and a massive hue and cry to go after those responsible. But 30,000 killed by our primary passenger transport system is widely dispersed and accumulates day by day in widely scattered individual "accidents", and so accepted as a matter of course: it is a largely routine tragedy, unless, of course, it is not our family that has been hit by that particular incident.

The death toll does does generate routine pronouncements that we must do better, and the occasional policy initiative to try to do better, but nothing like the response that is generated by a single event killing people by the dozens to hundreds.

However, everyone getting behind the wheel of a car is accepting that there is a low but real risk that they might kill somebody with their car that day. If they drink and drive, or text and drive, or talk on their cellphone and drive, that risk shoots up, but its still a small value per person, and so is easily ignored by those accustomed to ignoring small but real risks of events with extremely grave consequences.

The same need not be true of people traveling by train. Yonah Freemark writing on opinion piece at CNN, notes:

Rail, high speed or not, is one of the safest ways to get around. According to a National Safety Council review of 10 years of transportation fatalities [pdf], for every mile traveled, car drivers and passengers are more than 10 times as likely to die in accidents as passenger rail riders. In 21 years -- between 1990 and 2011 -- the Bureau of Transportation Statistics shows that nearly 900,000 people died in highway crashes, while fewer than 15,000 died in train collisions.

Indeed, as Yonah goes on to point out, in some countries, the safety record is substantially stronger:

Other countries' experience shows that high-speed rail can be even safer than the much slower U.S. trains. The bullet trains that zoom through France and Japan, for instance, testify to the astonishing safety offered by well-managed rail services. Each nation's system has been in operation for more than 30 years and provided billions of rides.

Yet thanks to advanced safety systems and extensive maintenance, no passengers -- zero -- have died as a result of a high-speed train crash in either country. ...

The Lessons of Chatsworth 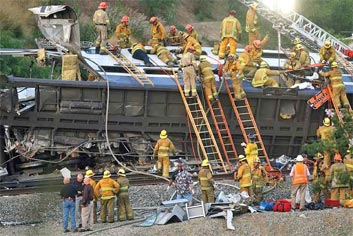 The train wreck at Santiago de Compostela was a derailment due to a train failing to brake coming out of a 110mph section of corridor heading toward a 50mph speed limit curve.

However, the lesson of the wreck seems to be the same as the one that transportation authorities learned here in the United States from the collision of a Metrolink commuter rail train and a Union Pacific freight train in Chatsworth, Los Angeles, killing twenty-five (25) people, with another 135 injured, 46 of them critically injured.

The system, known as "positive train control," can take over if an operator fails to slow or stop when a signal says to.
...

Kitty Higgins, a member of the National Transportation Safety Board, which is leading the investigation into the crash, said Sunday that she was convinced that such a system "would have prevented this accident."

The system would have automatically slowed the trains, perhaps stopping them in time before they crashed in Chatsworth, she said.

In the aftermath of Chatworth, Congress moved to require the installation of PTC on all rail corridors shared with passenger rail traffic, as well as rail corridors carrying hazardous cargo. According to Popular Schience

The Class I’s knew better than to object when Congress was passing the law mandating positive train control in the wake of the Chatsworth wreck. Bellyaching at such an emotional moment would have looked insensitive. Not a single interest group took a position on the law as it was being debated in 2008.

However, time has passed since Chatworth, and with the 2015 deadline looming, its not certain that PTC will be installed in time. This February, Congressional Quarterly weekly reported:

... Railroads, though, have shuddered at the $14 billion that the Federal Railroad Administration estimates it would cost to fully install a “positive train control” or PTC system on some 60,000 miles of track.

And with Congress gearing up to write a new authorization bill for rail programs this year, some lawmakers in both chambers will try to delay the program. House Republicans — including Bill Shuster of Pennsylvania, the new chairman of the committee that will write the rail bill — tried to push back the deadline for complying with the anti-collision requirement by five years in last year’s highway and transit law. The Senate-passed version would have granted the Transportation Department discretion to give railroads one-year extensions through 2018.

In the end, conferees didn’t touch the 2015 deadline, but House aides and industry lobbyists expect a provision delaying the mandate to be part of the rail bill this year.

Critics of investment in PTC argue that well over 90% of rail accidents in this country are due to cars and trucks either stopped on a level crossing or crossing unsafely - so that the majority of train accidents in this country cannot be prevented by PTC and, indeed, are themselves an additional side-effect of our heavy reliance on road transport.

Indeed, part of the strong safety record of the high speed rail overall is due to the fact that very high speed sections of both networks are completely grade separated from motor vehicle traffic. Positive Train Control is then directed to the two remaining principle safety risks of derailment due to operating at excessive speed and train collisions due to the driver of one train not observing the priority of another train.

Steel Interstate corridors may receive grade separation upgrades, and for the at-grade crossings remaining, the main Steel Interstate corridors will be provided with upgraded crossing gates. Indeed, some upgraded level crossing gates currently being trialed are backed by suspension cable and lock into a receiving post to form a barrier that can stop a pick-up truck traveling at 40mph in under 15 feet. And unlike a "dumb" level crossing, even one equipped with a crossing signal and bells, an upgraded level crossing gate can integrate into a PTC system, to automatically brake the train if there is an obstacle like a parked car or truck preventing the gate from closing.

At the same time, the Steel Interstate relies on the provision of 60mph heavy freight and 90mph rapid freight "slots" in the system. Mixing these two classes of freight together effectively, and running safely alongside conventional bulk freight, requires Positive Train Control for both safety as well as for improved capacity versus operating on rail corridors with "dumb" signals.

So I will be following with interest the progress of the new rail appropriation through Congress, to see whether a delay of the implementation of PTC is approved, and if so, at what terms.

And hoping that I never have to read, regarding another fatal train wreck in the United States, "The causes of the excessive speed are still not known. The line where the accident occurred is still not within the [Positive Train Control] System, a rail traffic mnagement system preventing a train from exceeding the established speed limit or disobey stop signals.

As always, rather looking for some overarching conclusion, I now open the floor to the comments of those reading.

If you have an issue on some other area of sustainable transport or sustainable energy production, please feel free to start a new main comment. To avoid confusion among those who might be tempted to yell "off topic!", feel free to use the shorthand "NT:" in the subject line when introducing this kind of new topic.

And if you have a topic in sustainable transport or energy that you want me to take a look at in the coming month, be sure to include that as well.

The land is cracked and the land is sore
Farmers are hanging on by their fingertips
We cursed and stumbled across that shore ...