What do these things have in common?

According to journalists on the ground, on Friday afternoon, security guards started confiscating tampons and pads from women attending House proceedings. Yup. Women who are on their period and need their sanitary products will need to leave their "weapons" at the door or be turned away. But don't worry, if you happened to bring your gun and you have your concealed carry permit, you're all set! Go right in.

ThinkProgress: Ohio Lawmakers Are Using Their State Budget To Try To Restrict Abortion And Redefine Pregnancy

...
On Tuesday, anti-abortion Republicans in the state added yet another budget provision related to reproductive health. The new amendment would require doctors to look for a fetal heartbeat before performing an abortion, presumably with an unnecessary ultrasound procedure, and then “notify the woman about the presence of the heartbeat.” Abortion doctors would also be required to tell women about the fetus’ likelihood of “surviving to full term.” ...

... written before the budget passed, but it was passed and signed into law chock full of reproductive slavery provisions ...

Slate: Dream a Little DREAM: The House GOP is struggling with how to slow-walk immigration reform to its demise.

...
The special meeting was called to deal with exactly that sort of randomness and confusion, from members and from the media. House Republicans have been cast all year as the assassins-in-waiting of “comprehensive immigration reform.” That was accurate: They don’t want to pass comprehensive immigration reform, and they are increasingly cold to theories that killing the bill will hurt their party.

What do they have in common? All three come from legislatures with heavily gerrymandered districts. The gerrymandering subverts the democratic notion of the voters picking their legislators into a system in which the legislators pick their voters, allowing one party to hold a majority of seats despite a clear minority of votes.

More pernicious than the partisan bias is the impact on individual legislators. In creating legislatures composed of primarily "safe" districts, legislators become more exposed to the wrath of their party's primary electorate than to the wrath of the general electorate of their general area. Why, after all, did the Migration Reform bill fly through the Senate, with its filibuster and all of its arcane rules for blocking change, while it faces the threat of dying the death of a thousand cuts in the House? Because despite the massive disparities in populations represented resulting from outsized states like California and Texas, at least a Senate seat cannot be gerrymandered for political advantage.

But for the House? In many cases, they've already packed the primary Hispanic population centers in their states into massively Democratic districts. So rather than being concerned about how they will be covered in the Hispanic media, they are only concerned about the long term implications of immigration reform regarding the electorate and how many additional House seats they will have to draw as Democratic vote sinks in order to retain a minority-of-the-vote, majority-of-the-legislators outcome. 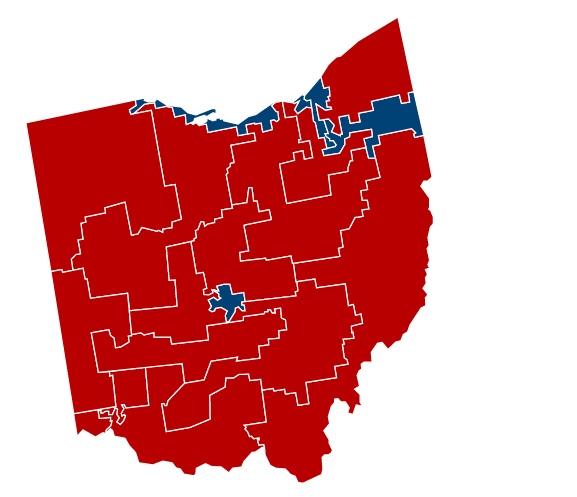 But gerrymandering has risen to a fine science with the rise of Geographic Information Services systems, and the ability to fine tune districting so that in 2012, with basically a split vote between Democrats and Republicans in House races in Ohio, four Democrats and twelve Republican Congressmen were sent to DC.

Those on the left, progressive or otherwise, are doubly handicapped by the gerrymander. First, because the gerrymander has a partisan bias. Johhny Side at Monkey Cage looks at states where districting is controlled by Republicans and by Democrats:

There are many electoral reforms that could be suggested to drag our electoral system out of the 19th century and into the 21st. Multi-member proportional districting for House districts and first and second preference voting are both reforms that we might discuss if the topic was, "what is the best way to do things".

But that would be akin to suggesting what color to paint the house when there is a hole in the roof. In many states across the country we have a grossly rigged electoral system with legislators picking their voters as opposed to voters picking their legislators. This is the real rampant electoral fraud in our society, not an average of less than one identity fraud case per Congressional district per election. And just like the rampant fraud in our financial system, it is control fraud, where the fraud is perpetrated by those in control of the institution.

Ohio had a citizen referendum measure to establish a non-partisan districting commission system, but the wealthy and powerful were able to scare people about this or that flaw in the proposal ~ some real, some imaginary, but none remotely approaching the gross flaws of the current system, while the Obama campaign, in its strenuous effort to end the campaign with a stockpile of dry powder, did not lift a finger on its behalf ~ and it was soundly defeated.

Alongside efforts to establish systems for drawing up districts to represent communities rather than in the interest of one of the two Grand Oligopoly parties, we should also explore simple rules that could be used to limit the abuse. In partisan districting states, these would not eliminate gerrymandering, but would curtail the extremes that are now possible using GIS software. This could include limits on shape, such as the the longest straight line distance through the district should be less than three times the shortest distance, and one district cannot surround more than 5% of the population of a neighboring district . It could include limits on representation of local government areas (municipalities, counties, townships, parishes), so that local government areas containing less than 5% of a Congressional district electorate should not be divided, and those containing less than 50% of a Congressional district may only be divided in half.

A rules based approach would not eliminate the problem by any means. On the other hand, just those rules would have prevented a 12:4 gerrymander in Ohio, with almost all districts requiring some boundary changes to respect local government boundaries and at least 11 of the 16 districts in gross violation of even the mildest rules aimed to restrict the drawing of outlandish district shapes.

A US House of Representatives with even 1/3 of its membership faced with the prospect of a competitive general election challenge, and without an ability to gerrymander the Latino vote out of Republican districts, would not be in a position to simply ignore what their policy actions look like in Spanish language media.

And an Ohio House of Representatives with even 1/3 of its membership faving the prospect of a competitive general election would not see a Republican majority push its radical reproductive slavery agenda into the Budget in an effort to sidestep the Citizen's Veto process that in 2011 was the route to demolishing the anti-labor Senate Bill 5.

Pretty much shows.we.are.screwed, and elections have no impact.  Whixh was my theory anyway.  You went to a lot of trouble to put this together,.so thanks.

... it doesn't precisely say that elections have no impact. Its just that its not always the elections that we think of as having an impact. Depressed Ohio Democrats staying home in 2010 after hope and change turned into hope for spare change certainly had an impact on representation in Ohio, as the Republicans swept the three statewide offices that decide the balance of power in redistricting in Ohio. And in 2012, Buckeyes voting down the citizen referendum to set up a non-partisan districting system certainly had an impact.

gerrymandered paradise for themselves in Texas.

But they never have enuf of a good thing for themselves.

Now they've gone and pissed off both the women and the Hispanics.

They may have pushed their advantage too far this time.

Thanks.  It is amazing to me how little attention this fundamental issue receives.  I would say it is as important in subverting democracy as the lack of independent media.

A few years ago, my daughter was an intern at Harpers, and the well-known journalist she was slaving for asked her to do research on this issue.  I helped out a little, and was floored at the extent and effectiveness of gerrmandering.  There has been a lot of study in terms of how to define gerrymandering, how to quantify its effects, etc..  This is not just a couple of backward states around the country; this is a huge issue.

... and part of the parallel is that the apologists for the status quo only get upset about either when its "the other guys" benefitting. Democratic party controlled gerrymanders are just as pernicious as Republican party controlled gerrymanders (though as the researcher above shows, the Republicans are better at it), just as anti-competitive practices in Democrat-supporting Hollywood are as pernicious as anti-competitive practices in Republican-supporting Big Oil.