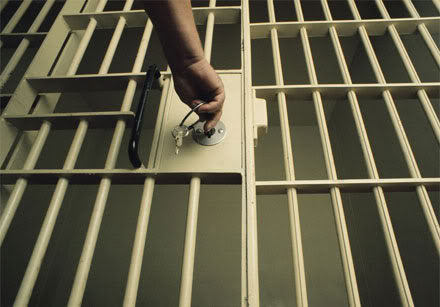 Horace commented on last evening's diary Transgender in the Hoosegow expressing concern about the treatment of transwomen in detention by ICE (Immigration and Customs Enforcement).

“There are many violations of human rights. One of them is that inmates in solitary confinement are forced to take tranquilizers in order to keep them calm.”

The counselor said that during the first trimester of this year, at least 10 transsexuals – all of them Latina – were pressured into signing documents for voluntary deportation.

ICE (Immigration and Customs Enforcement) did not respond to requests for comment on the situation of transgender inmates.

ICE probably doesn't comment on transgender inmates because ICE officials consider us to be less than human. I could be wrong about that, but they would have to convince me.

Amy Lieberman of WeNews (Womens eNews) has written two parts of a four part series about the treatment of transgender women caught in the deportation vortex:

After concentration only on the second one and seeing how long the diary had become, I'll look at that one later in the week.

A FOIA request for individual complaints filed by transgender immigrants detained by federal immigration forces shows that there have been 186 such complaints since 2008. The Office of the Inspector General (OIG) released documents in 169 of those cases. Seventy of them allege sexual assault or rape and 34 reported being segregated indefinitely. In 24 cases there were claims of harassment and assault.

WeNews analysis of the documents found that in less than 10% of the OIG cases…dating to as recent as July, 2013…was there any sort of administrative investigation or closure.

The OIG is the organization which investigates Department of HOmeland Security operations, but it does not track transgender complaints from detention facilities. Only 18 of the complaints are specifically identified as transgender or transsexual. An additional 35 are labeled as "he/she". In 115 cases either the complainants gender is omitted or redacted…but were returned pursuant to the FOIA request. 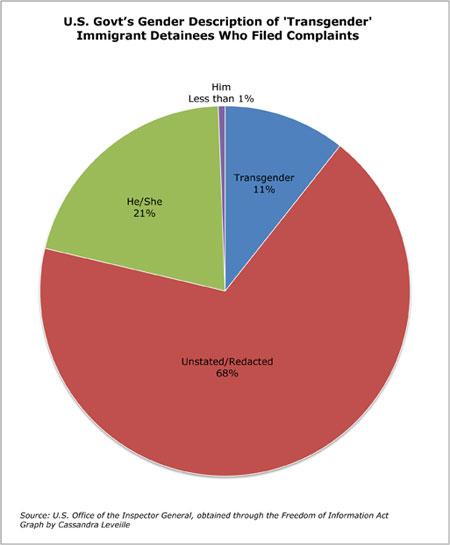 The 169 OIG complaints reveal a direct connection between physical placement of transwoman immigrants and victimization.

Transgender women are typically housed with men or in solitary confinement, sometimes following a physical altercation or a report of abuse, other times unprovoked and allegedly because they are transgender.

The 17 complaints not obtained from OIG were obtained from the US Office of Civil Rights and Liberties. They allege similar human rights violations.

Nine of these 17 say they were housed in lock-down/segregation for anywhere from six days to 14 months. Three of the complainants allege physical or sexual assault by guards or other detainees. All 17 are under investigation by the Office of Civil Rights and Liberties.

The immigration attorneys told WeNews that nearly all transgender clients and detainees who have sought legal advice claim to have suffered either physical or sexual assault or have been harassed and threatened.

On March 20, 2009, the OIG received a complaint via telephone from an immigrant detainee who said that "she/he" was being raped and sexually assaulted by other detainees. The caller disconnected before further details could be obtained. The case was referred to another office, with "no reply," as the document says, a phrase meaning no record of what happened. The complaint was closed on May 5, 2009.

There is no uniformity in the way transgender immigrants are being treated.

We know transgender immigrants are experiencing many different types of abuses and civil rights deprivations, from the use of solitary confinement to flat out denying medical care. It's more rare to hear about sexual assault, but it could be also we are not hearing about these incidents with the same regularity.

--Iván Espinoza-Madrigal, legal director of the New York-based legal and resource organization Center for HIV Law and Policy, which says it hears from a detained transgender women about every three weeks about being denied medication or segregated

According to attorneys and former detainees housing for transwomen in detention are routinely housed either with men or in isolation. In rare cases detainees who have had gender confirmation surgery are housed with women.

The United Nations Special Rapporteur on Torture said in august that the use of solitary confinement in American prisons can constitute torture.

DHS states that it has a zero tolerance policy towards all forms of sexual abuse or assault. But then, they also claim to only house about 50 transpeople at any one time.

GAO announced last year that it would investigate sexual abuse in immigration detention facilities. a report is expected in November.

Victoria was in detention for 11 months, during which she experienced a significant reduction of breast size.

Victoria left her Honduran home with her sister, also transgender, when she was 17. She was never assaulted in detention, but she says that was sheer luck and vigilance. On one occasion a group of inmates and a guard watched as she showered, laughing and making crude remarks. After that she showered only once a month…or fully clothed.

Victoria is now applying for legal residency in the US.

One detainee at the Otero County Processing Center in Chaparral, N.M., alleged in the Civil Rights and Liberties documents that she was placed in solitary confinement for 15 days when she spoke up about a male detainee who told her in the bathroom that he wanted to touch her buttocks and about correctional officers who she said tried to humiliate her by making her state her legal male name in public. In March 2010, she said a correctional officer lifted her shirt and exposed her breasts to about 40 male detainees during a routine search. She stayed quiet about the incident for months because she feared retaliation, according to her July 2010 complaint.

One transgendered woman at the Eloy Detention Center in Eloy, Ariz., reported that she saved the Styrofoam cup filled with semen that an officer handed over after she asked him for a glass of water. She said he threatened her with isolation and deportation if she did not drink from it. Once she did, she began to vomit.

The complainant is from Mexico. At the time of her February 2010 complaint she had been detained in segregation since September 2009. She said the same officer had previously made a series of harassing remarks. She alleges he asked her to perform oral sex on him. Another time, he ordered her to show him her breasts. She complied.

Bamby Salcedo, who was deported to Mexico four times after being arrested for either prostitution or drugs, says that treatment of transgender women in detention is no different than treatment in federal prisons. salcedo has always been housed with men because of her genitalia.

Obviously there is harassment, that is constant, but there is also sexual abuse. In prison and in detention you don't really go and talk to the guards because then people think you are snitching and that puts you at a higher risk of danger.

So, if anything, the number of incidents is under-reported.

Allen Beck, a senior statistical advisor at the Bureau of Justice, led a 2013 study of sexual victimization in jails and prisons. "There is not much data to substantiate a high rate of sexual assault in ICE facilities. We are just not finding it," he said in a phone interview. "There are much higher rates at prisons and jails [among U.S. citizens]."

As part of that survey the Bureau of Justice also surveyed five ICE facilities for sexual violence in 2011 and 2012, but only considered if people were female or male, not transgender.

Maybe the fact that they don't think we exist is why they don't find any abuse against us. Do you think?

One of the things we saw is that 59 percent of transgender inmates reported that they had experienced inmate-on-inmate sex assault at some point, which is an exceptionally high number. Very rarely did we have anyone reporting it. It was almost a laughable question.

I don’t wish it [detention] on anybody, it’s like dying while you’re still alive.

Ironically, the circumstances of the undocumented are worse when compared to people who have been charged with some kind of felony.

But to really get it, you have to connect this to the fact that often the only type of employment available to transwomen is prostitution or dealing drugs. ENDA could go a long way towards fixing that.

Housing transwomen according to our gender, not our genitalia would also help.