All of labor throughout the Cripple Creek District turned out to celebrate Labor Day yesterday in the city of Cripple Creek. Thousands lined the sidewalks and cheered as 5,000 labor union men and women marched with the banners of their various unions held aloft. The Western Federation of Miners was well represented with 3,000 members marching together in an unbroken formation. It took more than an hour for the parade to pass by and the cheering continued loud and strong for that entire time. If the mine owners believe that military occupation will break the spirit of organized labor in the Cripple Creek Strike Zone, they are sadly mistaken. 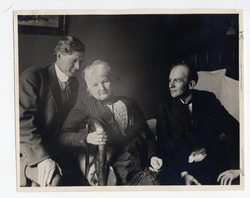 The U.M.W. District 15 Policy Committee has received no reply from the major mine operators to the Aug 26th letter requesting a conference. The letter was sent in an effort to avoid a strike in the Southern Coalfields of Colorado. A second letter was sent today. This time the mine operators are informed that a special convention will be held September 15th in Trinidad, and that they are invited to attend! The Policy Committee states that this letter will be the final attempt to arrange a meeting with the operators.

Meanwhile, Sheriff Jefferson Farr is making it known far and wide that not one single miner will make it from his district to the convention. He now has 326 deputies to back up that threat. Many of these deputies are gunmen imported from other states. Some are guards employed and armed by Rockefeller's Colorado Fuel and Iron Company. They are sure to be watching the roads around Walsenburg waiting to waylay delegates trying to make their way to the convention in Trinidad.

It is quite likely that the the delegates will vote to strike. The United Mine Workers of America is quietly preparing for a long strike in the Southern Coalfields of Colorado.

In this article Paul Bigman explores some of the fallout from the disaffiliation of the ILWU with the AFL-CIO and also discusses some of the issues involved:

As the AFL-CIO prepares for a convention where leaders say the goal is unprecedented solidarity with organizations outside the labor movement, the federation is turning its back on some inside the house of labor. Leaders have ruled that locals of the West Coast Longshore and Warehouse Union (ILWU) cannot seek “solidarity charters” and will be ousted from local and state labor councils. The ILWU international disaffiliated from the AFL-CIO last Friday.

And Jane Slaughter writes about the possibility that the East Coast International Longshoremen's Association could follow the ILWU out of the AFL-CIO:

On the heels of the West Coast longshore union’s departure from the AFL-CIO, it appears the East Coast dockers may also be headed that way. “We had said for a while, if the ILWU left we probably would too,” said Ken Riley, a national vice president of the International Longshoremen’s Association (ILA), which represents dock workers on the East and Gulf coasts.

Union Miners stand together;
Heed no operator's tale.
Keep your hand upon the dollar,
And your eye upon the scale.

Negotiation is very important to know the importance of brain storming. - Scott Safadi

But, as we shall see in the coming months, the coal operators preferred to murder men, women, and even little children, rather than to negociate with the United Mine Workers of America.