[T]he American dream is about freedom. Jobs mean freedom for workers to support their families.

[The American dream is] allow[ing] us all to succeed economically, achieve stability and security for [our families] and leave [our] children better off than [our]selves.

But for transgender Americans, this basic bargain of hard work, fair judgment on the merits, and the ability to advance in life is broken. 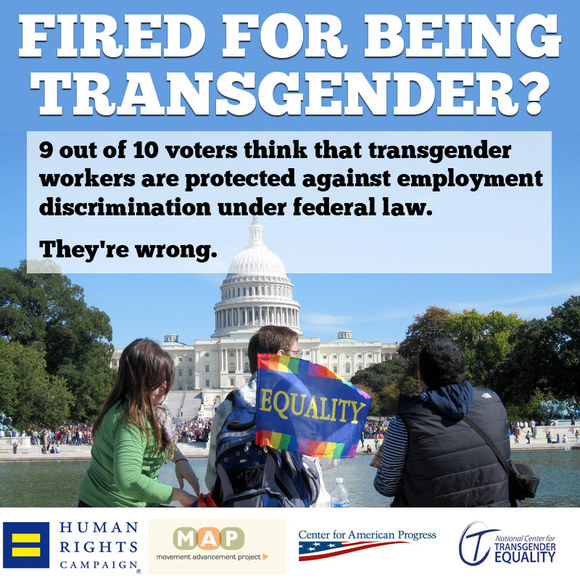 There is a new report about transgender people in the workplace. A Broken Bargain for Transgender workers (pdf) paints a extremely bleak picture.

The report is a product of the Movement Advancement Project (MAP), the National Center for Transgender Equality (NCTE), the Human Rights Campaign (HRC), the Center for American Progress, who partnered with the Service Employees International Union (SEIU), Out & Equal, the National Gay and Lesbian Task Force (NGLTF), and Freedom to Work.

The basic American bargain is that those who work hard and meet their responsibilities should be able to get ahead. It is an agreement that workers will be judged and rewarded based on their contributions and capabilities—no matter who they are, what they look like, or where they are from. This basic bargain is not just an idea—it is embedded in laws that promote equal access to jobs and that protect workers from unfair practices.

Unfortunately those laws do not adequately protect transgender workers. Even though 77% of voters claim they support protecting transgender people from employment discrimination, there is no federal law which provides explicit protection for transgender workers on the basis of our gender identity or expression. Only 17 states (California, Colorado, Connecticut, Delaware, Hawaii, Illinois, Iowa, Maine, Massachusetts, Minnesota, Nevada, New Jersey, New Mexico, Oregon, Rhode Island, Vermont, Washington) and the District Columbia offer such employment protections. Maryland, New Hampshire, New York and Wisconsin are conspicuous by their absence.

Even if transgender workers do find employment, we may discover that we receive unequal healthcare benefits to those of our coworkers. The message is that we are not due equal compensation and that our health does not matter.

A 2011 report by the Williams Institute estimated that there are 700,000 who identify as transgender. That's 0.3% of the population. Some estimates from inside of our community has placed the figure much higher. Transpeople live in all 50 states at approximately the same distribution as the general population.

Transpeople tend to have a higher level of educational attainment than the general population, with 87% of us having at least some college and 47% of us having a college degree. The general population numbers for the same categories are 55% and 27%, respectively. Twenty percent of transpeople have a graduate degree. Those figures make it quite puzzling as to why transgender people are far more likely to be unemployed, have low incomes, and live in poverty.

Today, more than 180 federal laws and thousands of state laws aim to support American workers in accessing good jobs in safe workplaces, having equal opportunities to succeed and advance at work, and receiving fair wages and benefits. Unfortunately none of these federal laws, and few state laws, explicitly protect transgender workers on the basis of gender identity/expression.

Even if we do get a job suitable to our talents, going to work can mean facing harassment, discrimination, and unjust firing…with no legal protection. We are also likely to receive smaller paychecks and reduced benefits than coworkers doing the same work.

There are two basic problems:

Those can be distributed across several barriers.

A: Hiring bias and on-the-job discrimination.

Many Americans have very little understanding of what it means to be transgender. As a result, for transgender people seeking work, the entire job search and hiring process is a minefield, particularly if a legal name or gender on an identity document (ID) does not match the outward appearance of the applicant. Once a transgender employee is hired, he or she may face many forms of harassment and discrimination, including denial of promotions or unfair firing.

Transgender workers may seek legal redress through the EEOC for sex discrimination under Title VII of the Civil Rights Act, but federal law offers no explicit nondiscrimination protections.

The state and federal governments have historically imposed "intrusive and burdensome requirements" which make it impossible for many transgender people to obtain accurate and consistent identification.

Employers often deny transgender workers leave for transition-related care, claiming that such care does not constitute a "serious medical condition." Thus transgender workers are faced with a dilemma: put their jobs at risk to take care of themselves or put their health in jeopardy by making do without leave.

Fifty-seven percent of Fortune 500 companies provide nondiscrimination protections for transgender employees. Four in 10 small businesses surveyed this year said they took steps to prohibit discrimination based on sexual orientation and gender identity and expression. When asked why they took those steps, 80% of those who did said it was because they believed in treating all employees equally. 72% said they did so because it was "the right thing to do."

After all, that is the American promise.

For employers, finding qualified workers can be a challenge. According to a recent survey, 47% of CEOs were very confident about their companies’ growth over the next three years, yet 54% were concerned about whether they will have the talent they need. In 2012, 31% of surveyed CEOs said that talent constraints hampered innovation.

Successful companies of all sizes know that imposing arbitrary limits on the hiring pool makes no business sense, while adding to the costs of attracting talent. Competing for top workers means making hiring decisions based on skills and abilities, rather than unrelated characteristics such as gender identity and expression. In addition, the premium on talented labor in today’s economy means that employers also cannot afford to lose qualified workers they already have. Treating transgender workers unfairly will result in a talent drain as these workers—and coworkers who believe in treating all employees fairly—begin to look elsewhere for jobs.

It is estimated that more than 2 million people voluntarily leave their jobs each year because of workplace unfairness such as negative or disparaging comments, unfair employment policies, or invisibility on the job. Cumulatively, turnover related to unfair treatment of workers costs businesses in the U.S. as much as $64 billion each year.

Workplace fairness means more than freedom from harassment; it means equal access to the benefits that transgender employees need to live healthy and productive lives.

This new report underscores the harsh reality of what it means to live and work as a transgender person in this country.

...when people cannot find legitimate employment, they can be driven to employment in the underground economies of sex work and drug distribution.  And that brings up a whole different concern:  Transgender in the Hoosegow.